I see Royal Mail prices are increasing on 23rd March. Time to stock up on stamps for all those The People's Friend submissions I keep promising myself I’m going to make this year. (Good time to buy stamps for Christmas too!) 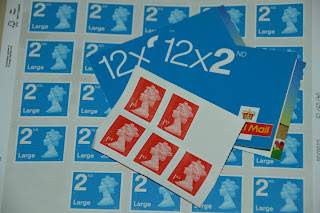 The People’s Friend insist on postal submissions from all writers, both new and those regularly published. They prefer a separate envelope for each story submitted. They will reply by email if you ask them to do so. (They will apparently make an exception for non UK writers but you should probably contact them first by email to explain and ask for permission and the appropriate email address.)

Woman’s Weekly still require all new writers to submit by post. Only previously published writers can submit by email.

I took part in The People's Friend writing hour today (it's on twitter every Tuesday morning 11-12). This is a good way to 'meet' fellow writers, and ask questions of the fiction team. In response to a question, about characters aged 70, they said that if characters had a story to tell, age wasn't relevant.

I asked about stories from a child's POV, as I've not seen many in the magazine and was told 'We really like junior viewpoint stories, but we don't seem to get a lot of them sent in!'

Talking of twitter writing events, you may like to join #WritingChat on Wednesday evenings. It's open to all writers and covers all genres. There's a different theme each week, plus you can ask questions and suggest future topics. To take part, just tweet 8-9 using the hashtag.
Posted by Patsy at 17:53 8 comments:

Good news from down under!

I've had two emails from Jude, the fiction editor at that's life! in Australia. One a personal reply to my query and another more general one to her writers.

Both say, "there is no need for new contracts and that it was a misunderstanding with Pacific Magazines accounts department."
Anyone who signed the contract issued in 2015, or has signed one since, will be covered by that.

In the personal message she added, "Thanks for bringing this up and glad we got it sorted." And in the other email she thanked those who'd been in contact.

It is worth querying things we're not happy with, sometimes (As happened with YOURS) we do get listened to. 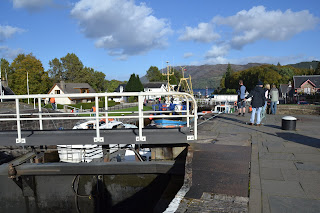 Are you researching, writing, subbing? Had any acceptances, publications or rejections? Any other news?

Do you have tips to share, questions to ask, or suggestions for this blog?

If you're wondering about the photo, it's a lock on the Caledonian canal. Its (admittedly slight) link to womagwriting, is that just as I was about to take it, I got a call from Liz Smith, the My Weekly fiction editor at the time. Feel free to use it as a picture prompt. If you'd like other writing prompts, short exercises and story/scene suggestions then you might find this book useful. 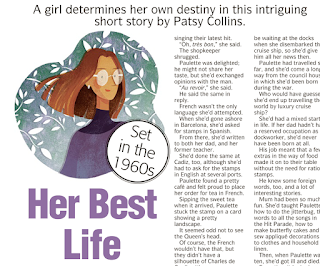 Talking of sharing news, do you like this illustration in The People's Friend Special which is out this week?

I didn't mention the character being a redhead or wearing glasses in the story, but I had both when I visited The Friend offices last year – and I don't think my fondness for purple is much of a secret.

New girl on the block said, I'd love to see a post about writing the ending of stories. It's something I struggle with, as I never feel comfortable just tying up all the loose ends. I want to leave room for possibility and ambiguity... as would happen in reality.
However, this can result in a weak ending to a story. I'd like some tips on how to combat this problem and also to hear how other writers feel about this. I hope this seems like a good idea.

She was offered the following advice –

Sharon Boothroyd Endings can be tricky.
I'd say, for the womag market, it has to be satisfactory. Tying up the loose plot threads is a good way to start.
Twist endings are the most difficult. I like to surprise myself! If I can surprise myself, I can (hopefully) surprise the reader.
There's a fine line between misleading the reader and cheating them.
I'd read lots of womag stories to get a feel of what a mag wants.

Penny A I would say that however much planning and revision I seem to do, I always end up re-writing the final paragraphs of every story several times. Eventually, (it's a just a gut feeling, I think) you know when it comes right.

I totally agree with both replies.

As Sharon says, they need to be satisfactory. That's probably the most important thing (in all genres and forms). To achieve that, the ending must come naturally from the plot, not be a cheat such as 'she woke up and found it was all just a dream' or it was the previously unmentioned identical twin brother who dunnit.

The ending also needs to answer the question, problem or issue raised in the story. (If there isn't some form of one of those, it's probably not a story!)

If it's a romance, then the reader will want to know if the couple will live happilly ever after, or at least happilly for now. You don't need their entire life story, but do end with a kiss, understandnding, proposal etc, so readers can imagine their future happy lives.

In a crime story the criminal should be caught. A ghost story might end with the ghost revealing why they're haunting a particular spot, or with them 'moving on'. Actually a character being seen to move on is a good ending for many genres.

Real life does indeed include ambiguity, loose ends and all kinds of possibilities, as New girl says. In a novel it's possible to leave a few threads unresolved as long as the main issue has a satisfactory ending. Short stories generally only have one main plot line, so there's nothing which can be left dangling.

I read somewhere that the reader should know when they've reached the end of the story, even if it's the last word on the page and doesn't state 'The End'. That seems like good advice. Don't leave your reader thinking 'is that it' or 'where's the rest?'

On the other hand, don't carry on and write three more paragraphs once the twist is revealed, the bad guy caught or problem solved.

Endings, as well as being tricky, are important. If the reader reaches the end and loves it then your story is a good one. It's worth taking Penny's advice to rewrite until it's right, and Sharon's to read the magazines and get a feel for what's wanted, in order to achieve that.

Do you agree with all these points?

The Weekly News are getting ahead!

I've just sold a story which will be in the May 23rd issue of The Weekly News. Shirley Blair has been buying and scheduling stories much further in advance than usual, to 'cushion the transition of my retirement next Friday – next Friday!'

I suggested that I mention on here that, because stories are scheduled up until the end of May, it might be best to hold off on subbing for a while. Shirley thought that was a good idea – see, I do have them sometimes!

Can you believe Shirley will be gone in just over a week?
Posted by Patsy at 16:35 2 comments:

Email ThisBlogThis!Share to TwitterShare to FacebookShare to Pinterest
Labels: The Weekly News

I've been told that Australian publication That's Life! are filtering in a new 'all rights' contract (I've seen a copy), which must be signed before any further payments are made. Apparently this applies even if you submitted your work and had it accepted before notification of any change.

If you write for this publication, and wish to know what rights are required before you decide whether or not to submit more work, then I suggest contacting the fiction editor to clarify the situation. I've done that and am awaiting a response.

Doing this isn't 'rocking the boat' or causing a fuss. It's perfectly reasonable to want to know the terms under which your work will be published.

I'd like to think that if enough writers demonstrate they care about this issue then the publisher might reconsider, or at least make their new policy known to all their writers, so they can make an informed decision about whether or not to submit. It's worth a try.

Updated 10/2/20 The query I sent, over a week ago, about the new contracts has not yet been answered. I've also heard from a writing friend who was issued the contract and hasn't had all her queries answered. Quite rightly she's not signing without knowing exactly what she would be committing herself to.

Updated 11/2/20 The editor can't help me as she's not seen the new contract. She offered to pass my query to the editor, so I'm noe awaiting their response.
Posted by Patsy at 07:00 11 comments: