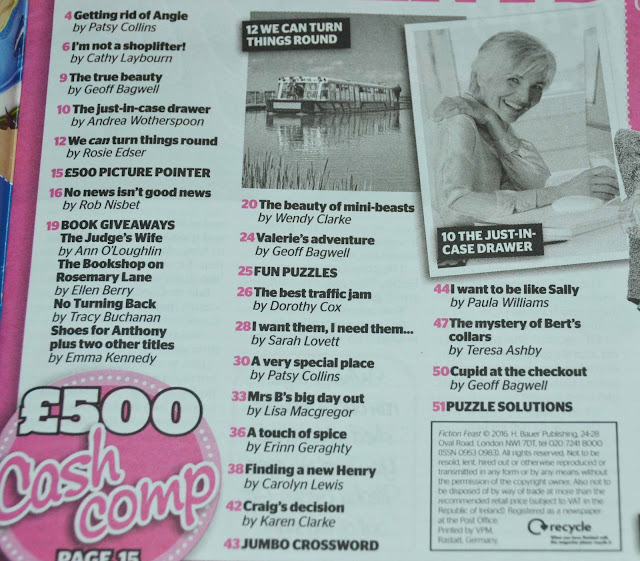 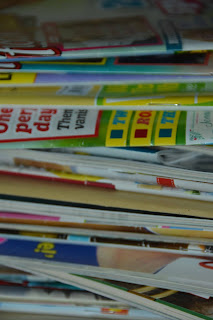 I know several of my blog readers live outside the UK and therefore find it difficult to get hold of many of the womags. Probably there are others who find the usual magazine format inconvenient (we'd soon collect a huge pile of waste paper if we attempted to read them all). Have you considered reading them electronically?

Some magazines offer a digital subscription. Woman's Weekly do so do all the DC Thomson publications.

Readly is a service offering hundreds of magazines, which seems convenient for those who read several different magazines. It costs £7.99 so probably not worth it if you only intend (or have time) to read a few, but a short subscription might be useful for research purposes. They offer a two week free trial.

Do you read any magazines electronically? Would you consider doing so in the future? Or is paper always your preferred choice?
Posted by Patsy at 06:48 4 comments: Links to this post

Email ThisBlogThis!Share to TwitterShare to FacebookShare to Pinterest
Labels: subscriptions

I'm happy for people to leave anonymous comments on this blog.

Some people don't have Google or other accounts so find that easier. Sometimes (as with my last post) people wish to say something potentially controversial or critical of a magazine's policy, or express opinions contrary to my own. That's all fine.

Does make replying and further discussion difficult though! No good saying 'I agree with anonymous' when there are four of them with differing views. If you leave anonymous comments, for whatever reason, can I ask that you sign off with some kind of 'identifier'? A1, A2, XYZ etc Pretty much anything which hasn't already been used in that particular discussion.

As you'd expect, I'll delete any posts which are spam, or offensive. I won't delete relevant posts simply because I disagree. Neither will I delete posts if people forget to add this identifier, it'll just make things easier if you remember.
Posted by Patsy at 07:07 3 comments: Links to this post

I've just had a couple of stories accepted by Norah at Take a Break's Fiction Feast (Yay!)

Along with that news, she informed me there are now new payment rates. You've guessed it - they haven't gone up! One page stories will still recieve the same amount, but the extra for longer ones is no longer so generous. Can't say I'm pleased at the changes, but I do understand why they're doing this and personally I'd rather get a bit less per sale than sell fewer stories.

If you've had stories accepted prior to today, then these will still be paid for at the old rates.
Posted by Patsy at 09:56 20 comments:

Thanks to Beatrice Charles for breaking some womag writing rules for us ...

Outside, the wind howled voraciously. In her bedroom, Daisy stood proudly by her bedroom mirror and peered anxiously at her own reflection.
"I'm so much prettier than my twin sister," she wailed piteously as she flicked her long blonde hair over her scantily clad shoulder, vainly admiring her slender neck. "I wonder where Deirdre is now?" she commented questioningly to no one in particular.
Suddenly she woke up and it was all a dream.

That's 7 at least:
1) don't start with the weather
2) avoid excessive adverbs
3) use 'said' rather than other verbs to describe conversation
4) don't have MC describe herself by looking in the mirror
5) no twins
6) no dreams
7) avoid multiple characters having names beginning with the same letter.

That's a pretty good start. Anyone like to add to the story? Or have advice on submitting it?

Personally, I think she should hand write it and submit to every magazine she can think of, then phone up two days later and ask when they're going to print it.

It's in English!
You can sign electronically - no need to print and scan.
Work sold to them CAN later be used in your own books.

Lots of the conditions are standard and totally reasonable - that the submitter actually wrote the piece and that they may edit it, for example. They are asking for more than just single use rights though. Also, although it's mainly very clear, there are a couple of points I'm unsure about. I've queried these.

As with any contract, PLEASE read it and be sure you understand and agree with all of it BEFORE signing.
Posted by Patsy at 08:45 7 comments: 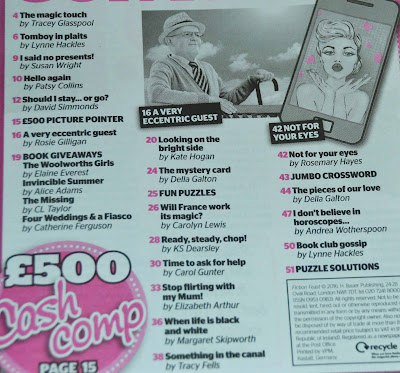 Quite a few names I recognise there.
Posted by Patsy at 12:09 6 comments: