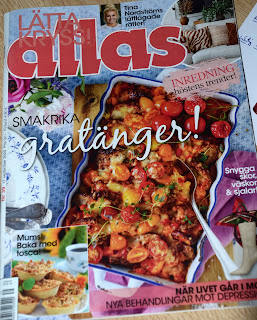 Womag news
I've been asked about the style of stories accepted by Allas magazine, and as I have a story in the current issue, now seems a good time to write the post.

The magazine is weekly and usually contains three stories, sometimes more. As it's published in Swedish, and I can't read that, I can only tell you about the ones I've written. My story in this issue is a spooky one. I've sold them quite a few not very scary ghost, or sixth sense stories, some revenge ones, a couple of twist ending tales and even one on local politics! Most though have been relationship based (romances and family stories).

The maximum length I've had accepted is 1,500 words. Some have been a bit shorter. They'll consider previously published stories. I do rewrite these for the Scandinavian market, taking the culture into account as much as I can, changing place and character names and considering the location and climate. Sometimes I write stories just for them. I submit in English.

If your story is accepted, you'll be asked to sign a contract, which allows them to reuse the story in Allers and Hemmets. You'll need to invoice for each story and will be paid, for the first use only, by bank transfer. You won't be notified about reprints, but each time your story is used, you'll be sent a copy of the appropriate magazine.

Submissions should be sent to lotta.gustavsson (at) allas.se It's not usual to get a rejection if your story isn't going to be used. If the story is accepted you'll generally hear back within a few weeks, but it can be longer. One of mine was accepted after three months, so I suggest leaving it a little longer before assuming a story won't be used.

If you've subbed to this market, please do share your experiences, to help build up a more complete picture of what's wanted, response times etc.

Wish me luck – I'm going to attempt to recreate the dish on the cover for our tea tonight. I'll have to guess most of the ingredients. I'm not entirely sure whether having a good imagination is going to help with that!

Competition news
I'll be doing a post with links to free to enter writing competitions soon. If you know of any, please let me know (in the comments, by email or on Twitter.)

Patsy, thanks so much for this helpful post. With three stories a week being published, it sounds like a really promising possibility. It's very generous of you to share what you've gleaned, so far. Can I just check the email address?
lotta.gustavsson@allas.se
Very best wishes to you and all your correspondents. Hope everyone has a great weekend. Eirin Thompson

@ Eirin – yes that's the correct email address. I don't make them clickable links in the posts, because that can result in a lot of spam for the person concerned. (From spambots and crawlers, not genuine readers of this blog.)

That sounds like a good deal. And you don't even need to know Swedish!

Thanks so much for taking time to write this out and post, Patsy. I'll definitely give them a go... I like doing a bit spooky!

Free to enter comps I can offer you Weird Christmas flash fiction - I think you posted about it last year. They are doing it again. I recommend reading previous winning entries.
https://weirdchristmas.com/2020/06/15/weird-christmas-flash-fiction-contest-3rd-annual-2020/

That sounds an interesting market, Patsy. It seems open to a variety of stories.

I live Weird Christmas! Craig's podcasts are a must listen from autumn all the way through to January

Thanks for this, Patsy. Will definitely give them a go

As I write a lot of spooky style stories this might be a magazine to consider. Thanks Patsy.

Good luck with the dish. I might give them a go with one of the ghost stories I sent and had rejected by Yours Fiction.

Thank you, Patsy. This is certainly food for thought with most of the markets here drying up. Not one you would automatically go to so definitely worth a look.

Thanks, Patsy. Although I send to Allas I've only had one acceptance with them which was for a family type story. Will try them again.
Good luck with the recipe! Let us know how you get on!

Thank you very much for the information, Patsy. Must be fun to see your stories in Swedish!

It's so helpful to have information about markets, style and word count etc. This is a market I'll try again. I did send a story a year ago but no luck.

Thankyou Patsy, this is a market I'd definitely like to try so the information you've given is really helpful, Ann

Thanks for your comments, everyone.

Lotta leaves Allas today (I've posted about it) and I'll attempt to get guidelines from those who are taking over her role.