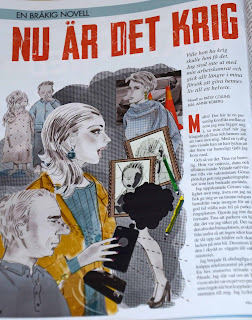 I have another story in Allers magazine. This publication, available in Norway and Finland, is a sister magazine to Allas in Sweden. The stories of mine which have appeared are reprints of those previously used in Allas (allowable under their contract).

Perhaps coincidentally they've each been published after a two year interval – using the same illustration. This time I was sent a complimentary copy – that hasn't happened before.

Have you had a story published in Allers? (That you know of – they didn't notify me about mine.)

If so was it previously published in Allas? Did you receive a copy?

Have you ever submitted to them directly?
Posted by Patsy at 09:58

Patsy, I've had a few published in Allers. Only once have I received a complimentary copy though.

Congrats, Patsy. The only sale I've made to Allas hasn't, as far as I'm aware, been published in Allers.

Congratulations, Patsy. People who have been accepted by Allas - do they always send a copy? I had one accepted in December and don't know whether it's been published or not, or even if it's normal to wait this long. Some of yours have had such nice illustrations, Patsy, I was looking forward to seeing mine!

Gail (aka Anonymous!) - do you subscribe to Readly? They publish both Allas and Allers.
I’ve just run a name search and see Allas published a story by you on 28 February, issue 19/10. I can email you a screen shot if you want - message me.

Congratulations Patsy I haven't been published by either Allas or Allers but I agree their illustrations look lovely. I also love that Bea has found Gail's story, well done! :)

Bea, that's amazing. I've sent you a message on Facebook. I love this site (and all womagwriters, really).

@ Geraldine – Maybe it's something they do only when they have time ?

@ Carrie – Only a couple of mine have. That makes me think they must get stories from elsewhere and there may be an opportunity to sub direct.

@ Gail – They do usually send a copy and they usually use a story within three months of accepting it. You're right, generally speaking Womagwriters are a lovely, supportive bunch of people.

@ Bea – thanks for helping out! (I hoped to subscribe to Readly and get the magazinees while I'm away in the van, but I inquired and discovered I can't read offline on my laptop, so it's no good for me.)

@ Elizabeth – Their illustrations are always interesting and often beautiful.

The illustration to my story was brilliant. The person who drew it really got the story. I did email them to say how lovely it was but .... didn't hear back. Or rather, I emailed a webiste which I assumed belonged to the artist.

Has anyone ever discovered whether they can sub direct to Allers? I'll have a look myself as it would be interesting to find out.

Lovely illustration. One of my first ever published stories (in My Weekly) was then published in a Norwegian mag but I can't remember which one as it's so long ago! A writing friend had given me the address to send it to but I never saw the published story - only received the cheque which was more than I got for the original!

I've had a few published in ALLAS, though only received magazine copies of the first few. Didn't receive a copy of the mag with the Christmas story they bought from me this year. I've no idea if there have been any reprints in Allers, though. Agree with others that the illustrations are very lovely and unusual. Well done on your publications, Patsy. Good wishes Kate Hogan

A sale, coincidentally, to this mag today, Patsy. As well as sending an invoice in a Pdf they appear to want me to send one in an actual letter. Did you have this? I didn't the last time. Seems a faff given I don't have any air mail stationery.

@ Rosemary – There was another mag with an unpronounceable name which would take British reprints, but I don't think it does now.

@ Kate – Shame you didn't get your Christmas story.

@ Geraldine – Congratulations on the sale. Is that to Allas or Allers? I've not been asked for a physical invoice from them. That does seem a faff, especially if they still want the electronic version.

Allas, Patsy. I haven't been asked for a physical invoice from them before, either.

Again, I'm coming in late on this one. A quick look at records tells me I sold Allas six stories in 2004. I'd have to look for later years. They always sent a copy of the magazine. I haven't submitted to them for some time now.

I sent the invoice email every time with no problems.