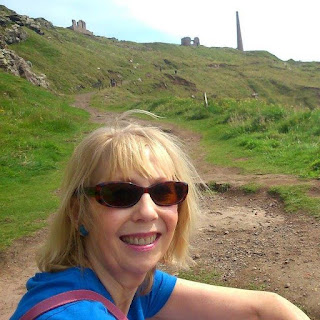 My guest today is my critique buddy and womagwriter Carrie Hewlett.

I’ve been lucky enough to have had a number of short stories published in the Womag world here in England, Sweden, Australia and in Ireland. But I seem to have had the greatest success in getting quite a few children’s stories published. Most especially with the lovely magazine, Ireland’s Own. (Submission guidelines here.)

If someone asks me how I do it, I’m not sure how to answer. I suppose to start off you have to think like a child. Let your imagination sky rocket and the most mundane things can take on a world of their own.
Like a cow living on the moon eating bowls of custard every day! (That gives me an idea!) Something that couldn’t necessarily happen in real life!

My childhood revolved around making up imaginary tales. Leaping across the lounge furniture imagining the floor was molten lava. Or pretending my dolls were swimming across the hall floor in high seas! I just loved making up amazing stories in a fantasy world. 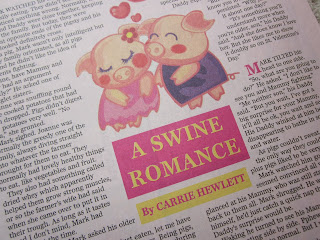 Ireland’s Own prefer children’s stories to be 750 words, and have a beginning, a middle and an end. Much like a womag story to a degree. But children’s stories have to have a happy ending. After all, if you were a six-year-old child being read a bedtime story, would you want it to end miserably? No! You’d want them to all live happily ever after!
But after that one can just let ones’ imagination soar.

Do include lots of dialogue rather then just description, so that the story shows rather then tells. And Ireland’s Own love you to bring an Irish flavour into stories too. They also have wonderful illustrations to accompany each story which I love.

My first children’s story sale to them was about a squirrel who got tempted by the smell of nuts and didn’t do as her mother told her. The morale being one should always listen to your mammy.

Another time I happened to be staring off into the garden one day and a squirrel caught my eye. He suddenly whipped his tail around very, very fast – that gave birth to my story about Sam Squirrel who was much in demand by the other animals as he was able do housework and dry clothes by whizzing his tail around in circles like it was on a washing machine drier setting! 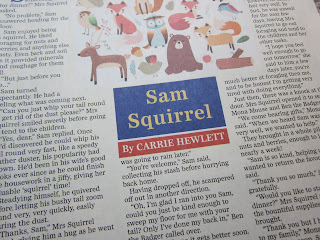 I’ve even written a story that was included in a Valentine’s issue about how much pigs love chocolate – occasionally! – and one should never forget loved ones at special times of the year.

I tend to split my time with writing normal womag stories and writing children’s stories – and I’m even trying to work on a children’s book though that IS taking a bit longer than a quick 750- word tale!

So, I think the best advice is to think outside of the box. Make the story fun, entertaining and different. And above all else, remember what you yourself enjoyed reading as a child, take yourself back to that era, then write from the heart.

Thanks, Carrie – you've made it sound so much fun than I intend to have a go myself.

Thanks for these insights Carrie, and thanks to Patsy too.

Lovely article, Carrie and very informative. One of the first stories I ever sold was for children.not tried to do one for a whilst so might have a go.

Thanks, Niddy. We always remember our first stories don't we :)

Thanks Jacqui :) Always worth a try.

Thank you, Carrie. Something to think about.
Alyson

Carrie, you make it sound so easy! I'm sure you work very hard at it. Thanks for the insights.

Thanks Bubble. Some stories are easier than others. You just have to get into the zone :)

Great post Carrie, and interesting to here the differences and similarities between stories for children and womag stories. I love the lava!

:D Thank you. What comes from having a vivid imagination, eh!

Really interesting post, Carrie. Thanks for sharing your knowledge with us.

You're welcome, Susie. And it's thanks to Patsy too for inviting me.

Great post Carrie love your ideas for children’s stories too, thanks :)