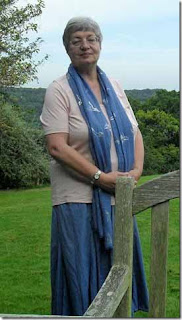 I've been recalling a definition this week, the one that goes: “retirement is when you get up in the morning with nothing to do, and go to bed each evening having done none of it.” Anyhow, with time to ponder at last, here are a few of my thoughts about inspiration, writing and poetry.
The poems from my (now distant)  schooldays – with lines that still come easily to mind - were mostly from times even earlier than that.  Nineteenth century poets such as Keats and Browning ('My Last Duchess' – I loved the drama!);  twentieth century poets such as Drinkwater and Ted Hughes.  Away from school, Edward Lear was a favourite, and I still find any nonsense rhymes wonderful joggers of the imagination.

It wasn't until much later,  when I began writing, that I read more modern stuff and found out that a) poems didn't have to rhyme and b) any poet worth reading can squeeze two words together and magic up a whole world.  (A very useful skill in short-story writing, too, of course.)

I especially love Causley, the Cornish poet, for the taste of salt and danger  in his poems for adults and children. Oh, and Sheenagh Pugh...  so keeping a favourite poetry book handy on my desk (along with a Dictionary and a Grammar) goes without saying.

And what about recalling and updating nursery rhymes? 'Bo-Peep' for example. (Daffy shepherdess (or similarly forgetful more modern protagonist) is unexpectedly saved from her own foolishness by actions of her hitherto unregarded woolly-minded work colleagues.)) Or 'Tom, Tom the Piper's Son': (Out of control teenaged son of local musician gets unexpected come-uppance while attempting to steal squealing squeeze-box-accordion from the band).

There are many, many more possibilities, I'm sure.

Thank you, Patsy.
I might give one of my own suggestions a trial run (sometime!)
Penny A.

Good to read a post about poetry, Penny, thank you!

Managed to get Woman's Weekly Fiction Special here in Winnipeg this week. Reading it on Kindle is just not the same.

Lots of familiar names. Patsy has two, Teresa has two (I think) haven't read it yet.

The last story I sent her, Clare returned and said it was 'touching but no real surprises'. Och well! She's always so nice about it.

Also want to thank Patsy for this site. I pop in from time to time and really enjoy it.

I've sold to all UK and almost every other womag on the planet but still can't crack Norah. Near misses but no sale. Any info on TAB always welcome. Norah, are you reading this:-)

Does anyone else have one that they just can't break into?

Another question. Has anyone had trouble with Kindle payments for short stories and anthologies going into their bank accounts? Amazon have sent the money but it's not accepted. I've had a few now and not sure what to do about it. Will ask Ginny as well.

All the best,
Maureen (Scotty)Brannigan (aka Kirsty Peters)