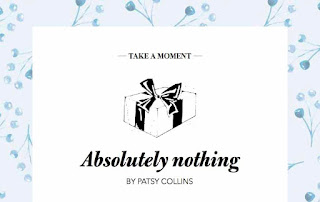 A while ago I posted the guidelines to a new (to me) magazine. Of course I've sent them a couple of submissions since then. Although it's taken some time to get an acceptance, I'm delighted that my story Absolutely Nothing will be in issue 15 of In The Moment, which will be out on 24th July.

The process with this publication is that stories are acknowledged by email within a few days. The acknowledgement contains the warning that they receive a large number of submissions and the promise that someone will be in touch if the story is suitable. I've not had a rejection, so assume they don't send these.

When my story was accepted, around three months after submission, I was given details on invoicing (it's done after publication), asked to sign a contract for single use rights and invited to ask if I had any questions. There was one line in the contract I didn't fully understand, so I took them up on that and received a quick and clear response. 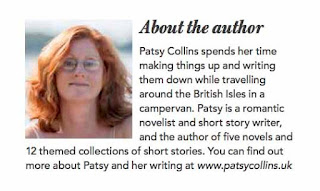 I was also asked by the production editor for my photo and a short bio. Once it was all put together I received a pdf proof and was invited to say if I felt any amendments were needed. The story had been edited; it's always interesting to see what has been changed and to attempt to work out why. In this case I think it was made slightly more gentle and a little shorter.

I made a couple of small suggestions, including using a capital N in the title. That wasn't done, because it's the house style not to, but the other change was made and I was sent a new pdf to confirm that. The images in this post were taken, with permission, from that pdf.

The story will be published in a pull out section, along with a drink recipe and a crossword, which I think is rather nice.

Do you find it helpful/interesting for me to post about my experiences with different magazines? If not, I'll spare you all the gory details in future.
Posted by Patsy at 05:30

Email ThisBlogThis!Share to TwitterShare to FacebookShare to Pinterest
Labels: In The Moment, published story, submission process

Very helpful! Thanks for sharing and do keep doing so, Patsy. Congrats on the story sale too. New markets are most welcome at the moment.
Alyson

Sharon at A Quick Read said...

Yes, very helpful. And, congratulations on the acceptance.

Well done Patsy. Very useful to know. I had no response to my sub so will try again.

Well done, Patsy! Yes please share, what length was your story and what was the theme? Good wishes Kate

Keep on sharing, Patsy, the information is invaluable. Well done on the acceptance.

It's very helpful, Patsy. Please keep on sharing. And congratulations!

Very helpful, thanks Patsy and congratulations on your acceptance!

This is really helpful, Patsy - thanks for sharing it and well done. I love this magazine every now and then and have been studying the kind of story they publish in the hope of submitting eventually. look forward to reading yours.

Always encouraging to hear of success :-)

It's definitely helpful, Patsy, to hear of first-hand experiences of different magazines, especially those that are new/non-traditional. And congratulations on your successes!

Thanks to everyone for your congratulations and for letting me know this information is useful. I hope to eventually get round to posting something similar for the other magazines.

Thank you, Patsy, for sharing your experiences. I found your article very useful.
Congratulations on your successful submission, hopefully by now you will have had more.
Somehow, I’m a year behind. As today is 23 July2019!
With best wishes
Wendi Schreder