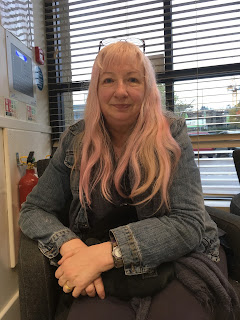 Today's guest is Lynne Pardoe. Although Lynne also writes lovely womag stories, I've invited her to talk about how she started writing non-fiction for this market.
It was 17 years ago I went part-time in my job a social worker because of ill health. I had the good luck to be invited to a party at Deb Dooley’s house in the next village along, Sheepwash. I hadn’t met Deb before but she was really nice, a journalist for the women’s magazines. "That's just what I want to do," I told her.
"Why don’t you come on over and I’ll show you how I do it?" she said.
I didn’t need asking twice, I was there at the first opportunity. And what an opportunity! Not only did she turn out to be a fab friend, but she walked me through the process in those early days. When she showed me the collection of magazine articles she’d written, I thought she’d be showing me a folder, but it was a filing cabinet brimming full!
Basically the process is similar to that for a book, but shorter. You write the first few lines and then give a synopsis of the rest. Your aim is to imitate the style of the magazine you’re aiming at but with a totally new and different idea. So 'Take a Break' is totally different to 'The Lady'.
A good way to start is with a case study, and these need to be matched with the magazines target audience. Magazines for younger women will want case studies in a similar age group and likewise older women’s magazines. All will want people’s age, marital status and photos. Some magazines send a professional photographer. If your case study isn’t happy with this, it might be a problem. Most of the big charities and organisations have lists of case studies and can put you in contact; ring and ask for the press office.
If there are any restrictions about what your interviewee will agree to, mention this when you pitch you idea, rather than let the editor find out later date and be really fed up because they've done a lot of work on it.
You also need to make clear you’re going to write the piece and aren't just passing on a lead. It’ll be cheaper for them to get one of their staff writers to do it, so make sure that doesn't happen due to a misunderstanding.  Don’t write the whole thing in advance, as the editor might want it done in a particular way, or involving a particular expert. They’ll also tell you how many words they require. 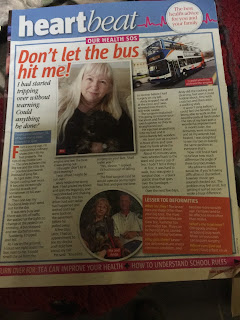 It often helps to find an angle, maybe the most bizarre aspect of your story. I have a rare condition which affects my arms and legs which started at my feet, hence the title about running in this article for Take a Break.
Some magazines have information in boxes or fact boxes at the side. Put these 'pull-outs' in your proposal too. You will get ignored a lot. Few editors write to say no, so move on if you hear nothing after a few days. Don’t send an idea out to several places at once because if several accept, the editors you turn down might not show interest in your future ideas.
Proposals are best sent to the relevant editor, i.e. health, features, sport et cetera. Ring the magazine to get the right email address. All the main magazines employ sub-editors whose job is to take your copy and make it exactly fit the magazine style. Your writing needs to be clear and concise. Once your idea has been accepted and you've delivered the work at the agreed point it’s not uncommon for one of the subs to ring you when the getting the magazine ready to print for clarification on a few points.
I have 'Country Living' in front of me. They have a case study for their regular rural business feature.
This is how I would have proposed this feature:
Case study idea Rural Businesses.
The Proof of the Pudding.
Susan Green has a confession about her observance of stir-up Sunday. "I’m too busy to worry about which direction the mixture is stirred in."
Continues: Susan’s age, career history, what spurred her into her rural career, how her business began, problems they overcame, photos.
It might include sidebars or boxes of extra information, interviews with established similar businesses, law on selling cooked produce etc. Look at a few magazines and see how you'd propose articles that are in there to get you into the feel of it.
For further info see:https://www.journalism.co.uk/
The London School of Journalism runs some excellent courses, including some by distance learning. lsj.org/web/freelance.php
The National Union of Journalists (NUJ) is also an excellent organisation to join and can get you a press card which will help you get into events. https://www.nuj.org.uk/home/
The London branch has a page on typical figures for each magazine. Circulation figures can indicate pay. http://www.londonfreelance.org/rates/w1000mag.html
You can also stay at the wonderful place that started me off, Deb doesn’t run it anymore but it’s still a specialist writer’s retreat and I’m sure just as inspiring. http://www.retreatsforyou.co.uk/

Fascinating article, Lynne and Patsy. In particular I appreciate the practical advice. I've never really understood how to pitch an article and your example is very helpful.

Really interesting to hear in detail how it all comes about, Lynne. (And a lovely picture, too!)

This is a revelation to me, Lynne, and definitely will go on my articles to remember list if and when I decide to take the non-fiction direction for my writing. Thanks for sharing, provoking my ambition and for the practical advice.
Alan

I don't think I'll ever write an article, but it's interesting to know how you got started, Lynne.

Fascinating post, Lynne. I've had a few articles published and I'm keen to do more so the pitching guide is really helpful, thank you. I always worry that mags might dismiss writers who aren't 'proper' journalists i.e. have trained with the NUJ etc. It's good to know there are opportunities for the rest of us out there!