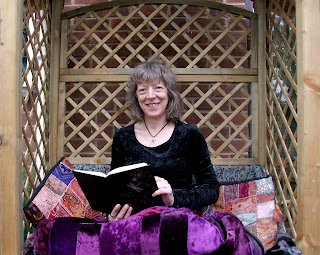 My guest today is Sue Johnson.

I have always been the sort of writer who has several projects on the go. I usually have about fifty pieces of work in circulation at any one time because it stops me worrying about rejection.

I am published as a poet, short story writer and novelist and also create books and articles aimed at helping other writers. My involvement in women’s magazines began in 1999 when a college lecturer told me to rip up a story I’d written for an assessment. I sent it to a competition organised by agency Midland Exposure and ended up being taken on as one of their writers. The story was published in ‘Woman.’

Since 1st January 2013 I have written a poem a day every day. (It’s amazing what happens when you start making New Year’s Resolutions after a packet of wine gums!) Some of these have been published as single poems in small press magazines, or have gone on to form part of a poetry sequence or collection. Many of them end up as the nucleus of a short story or scene from a novel.

I have a vision in my mind’s eye of the words and ideas growing like pieces of knitting. The words can be unpicked and re-worked. It is great fun to take a poem that isn’t working, cut it up and reposition it on the page, adding new words if necessary.

The best advice I was ever given was to carry a notebook. Ideas spring from the most unexpected people and places. Many of my ideas are inspired by country walks and I also love writing in cafés. I’m very fortunate to have lexical-gustatory synaesthesia – many words and names have a specific taste. For instance ‘Robert’ tastes of strawberry jam, ‘punishment’ tastes of liquorice and the word ‘life’ floods my mouth with the taste of Marmite. 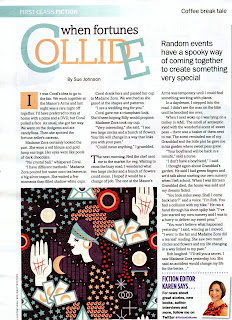 Many ideas for poems are inspired by childhood memories and these in turn spark ideas for characters and settings. The following poem, inspired by a teenage memory of going to the fairground became a short story entitled ‘When Fortunes Collide’ – published in My Weekly on 3rd September 2016.

Music vibrates through the soles of our feet.
The smell of onions mingles with candyfloss
flash of lights mesmerises
colours collide like dodgems
and the Ferris wheel keeps a constant rhythm.

The fortune teller’s dark eyes glitter
when we cross her palm with silver.
Her words taste of new pathways
as she studies tea leaves on white china.
Outside her caravan a full moon rises.

Further information about my work can be found at www.writers-toolkit.co.uk or follow me on Twitter - @SueJohnson9
Posted by Patsy at 07:30

Email ThisBlogThis!Share to TwitterShare to FacebookShare to Pinterest
Labels: inspiration

What an inspiration you are Sue, hard to believe you've been writing a poem a day since 2013!
And so much work out there too.
Thank you for sharing.

Fascinating post, Sue, and a lovely poem. I love to hear of other writers who write in a variety of forms and genres (as I do) but I've never tried writing a poem every day - or even every week! I can imagine the inspiration it must bring to your other writing.

That was very interesting, thanks Sue.

I love the idea of being able to unpick lines and knit them elsewhere. :)

I've always thought of writing like a piece of knitting too - where you pick up the thread of one colour and use it again further on; and how when you're almost there but there's a loose end, you tug it and either it tightens everything up or it all falls apart. (Although don't ask me to actually knit anything ... )

It is imperative that we read blog post very carefully. I am already done it and find that this post is really amazing.