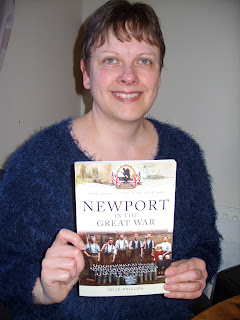 No one was more surprised than me when I tentatively opened an email from Norah McGrath, fiction editor at Take A Break Fiction Feast, a week ago. I say tentatively because I wasn’t sure whether it would be an acceptance or an email to tell me to stop subbing rubbish stories to them. I almost didn’t dare hope. I’m pleased to say it was an acceptance.

I’d had a break from subbing short stories, only subbing a few every now and then, for a couple of years while I was distracted by writing three non-fiction books for Pen and Sword books about WW1. Then I decided to try writing more short stories again. I’ve been subbing to Take a Break, on and off, for eight years and had never hit the mark before so when the email came I can’t really describe the emotions I felt – I was relieved but I don’t think it had sunk in. I was convinced they’d make a mistake and I’d get another email later with an apology – they weren’t going to use my story after all! Thankfully, it wasn’t a mistake, although I don’t know what I would have done if it was! The story they bought was actually one that had been rejected by Woman’s Weekly.

I’d had some success with That’s Life (Australia) and the Weekly News but it was one of my 2016 goals to get at least one story in Take a Break magazine and also in Woman’s Weekly. I made the Take a Break goal just by the skin of 2016’s teeth, but, as yet, Woman’s Weekly has evaded me! It’s been rejection, after rejection, after rejection with them. I will get there, of that I am determined and it has become my main writing goal for 2017, that and trying to get another story in Take a Break!

The advice I’d give to people still trying to get published with them, or any of the other womags is the same advice as I had been given by other writers over the years, to keep trying. I could have quite easily have given up after the umpteenth rejection but, and I don’t know why, I didn’t. I am so glad I persevered. I kept reading the magazine – I have it on subscription - and I kept writing and subbing to them. It’s the only way I know that works.

Hard word and determination is everything. There are no guarantees that you’ll get a story published. It’s a very competitive area, but keeping on keeping on worked for me! It was an amazing feeling, after it had sunk in, and has given me the confidence to keep writing short stories and subbing them. Keep listening to the excellent advice of other generous writers and good luck!

Julie also writes non-fiction, including books about the Great War set in Kidderminster

Congratulations Julie :) Gives me hope, as Woman's Weekly and TAB keep rejecting me, so I will keep at it with fingers crossed, and make that my goal for 2017 - if I can't slip it in this year! lol Happy Christmas :) Carrie

Congratulations! I love your spirit and determination.

Well done on that acceptance, Julie. I really admire your tenaciousness. I could do with some of that as I'm terribly lazy.

Congratulations Julie! Those emails from Norah McGrath never get old.

I feel your pain though, WW is one market that I just haven't been able to break into yet. Hopefully we'll see both our names in there in 2017 ;) That's a resolution worth trying to stick to!

Well done, Julie - you've proved how necessary it is to never give up! Good luck with that WW sale soon.

Your post completely resonates with me as I'm the same - have lots of stories published but really wanted to get into Woman's Weekly and Take a Break but have been writing novels most of the time. Then, suddenly, I hit it lucky with WW a few weeks back so I'm now more determined to keep trying with TaB (in between the longer work).

Thank you, Em-Musing. It took an age, but I got there in the end. It was well worth waiting for. I must get on with working on more for them.

Thank you, Frances. I have to admit that I do get lazy with my writing too, though! I must get on with more stories to sub to them!

Thank you, Shane! I would love to see our names in the same magazine soon too! I know you've had great success with The Weekly News. We'll keep subbing to WW - keep chipping away!

Thank you, Rosemary. Yes it is hard work and perseverance that are the key, I feel. Good luck with TAB!

Yes! Apparently I had a story in the recent supplement!

I'm all for rejigging! Yes, I had one in the same supplement I think.

Congratulations on the TAB acceptance, Julie. I've only had one story published by them and know it's quite an achievement. Wishing you a very successful 2017 x

Thanks for being a great guest, Julie - and for taking the time to reply to comments.

Thank you, Francesca! I'm hoping I can get another one in with them at some point, and Women's Weekly, but it's so hard! Good luck with your writing next year too.

Thanks for inviting me, Patsy x

Thanks for inviting me, Patsy x

Thank you, Francesca! I'm hoping I can get another one in with them at some point, and Women's Weekly, but it's so hard! Good luck with your writing next year too.